Two intrepid teams of Carnegie Harriers entered the 50th running of the Allan Scally, running 5km each around a fast course in Glasgow Green. After a month of racing in mud, wind, rain and sleet, it was a pleasure running in sunshine!

Carnegie’s B team also has a good day out. Michael Bisset took the just-in-time approach to pre-race preparation, and arrived just before noon as runners were being called to the start! He did very well to keep his composure and run 22:32 handing over to Isobel Burnett who looks to have run the fastest F60 leg in 22:08. Neil Anderson demonstrated his recovery from recent 24 hour ultra-running by running 23:01 to handover – after a 12 minute gap – to Sue Walker, who ran just under 30 minutes for her second run of the day, but was credited with a 51:50 time!

Great team spirit was shown by all 8 runners competing in the biggest ever road relay in Scotland, with everyone waiting quite a while to chum Sue in to the finish of her second run of the day. 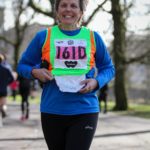 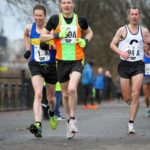 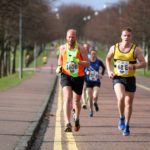 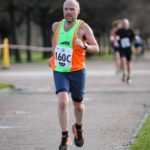 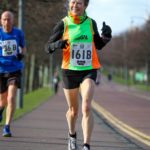 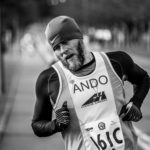 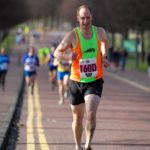 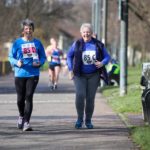 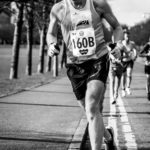 (Sue had earlier run a leg of the relay race as part of a Scally family team, accompanying her sister Jackie on her first ever event. Jackie had been following Couch to 5k especially for the event, and completed the 5km in around 56 minutes. Allan Scally was Sue’s grandfather)

Other notable results in the race include former Carnegie Harriers club president, Chris Robison who ran 20:40 as part of a Shettleston Vets team, and 84 year old Willy Drysdale from Law who ran 43:11. Willie ran in the very first Allan Scally race in 1969, and was 10th finisher on the first lap of the course on that day. The course then was a 4.6893 mile loop (approx.!) which Willie ran in 25:18. Saturday’s conditions were very much better than that first race in November 1969 when the wind, rain and sleet caused every other sporting fixture in Scotland to be cancelled. Runners are tough!

For anyone interested in the history of the race or of Allan Scally, there is a new website with a full race history, which can be found here: http://www.salroadrunningAllanScally

Sue also wrote this great tribute to  Allan Scally, who was her grandfather!

Before I go further, I’d like to acknowledge the tremendous amount of work put in by Elaine and John Mackay to make this race such a success If Allan had only been a great runner, I’m sure his memory would have lived on in the record books and with his family. But Allan was more than just a great runner and that is why we remember. Allan Scally was a great runner, a great coach and
a very kind man. We remember Allan Scally for all of those reasons.

Allan was a runner in the 1920s and 30s, the era of the Great Depression. He would have been very well aware that by running in races offering prize money, he was scuppering his chances to represent his country in empire or Olympic Games. He chose to supplement his income as a railway worker by entering and winning professional races, winning cash prizes, and possibly winning a share of the gate money and betting purse too. He ran under the racing name of Scally of Broomhouse (by the old Glasgow zoo), and won the Powderhall marathon several times. He was world champion at a time where the holder was challenged to a race, very much like boxing matches today.

When Allan hung up his gutties, he became a coach for Shettleston Harriers, and possibly his one regret over his professional running career was that he was never allowed to become a member of Shettleston Harriers. It hardly seems credible to us now, that winning cash prizes had that impact on joining a club. Changed days indeed!

Allan became club coach and led the club to many successes at county, district Scottish and uk championships. Two of his most famous protégés were Graham Everett and Joe McGhee. Allan wasn’t a running snob though. If you were keen and willing to work, he was prepared to coach you. You didn’t have to have star qualities. Mr Scally did expect you to work though and to turn up for training sessions. From all I know of him, Allan would be delighted to see the success of jog Scotland groups and the couch to 5k initiative, bringing so many people into a love of the sport he loved.

As well as being Shettleston’s club coach, Allan coached youngsters at St Bridget’s school youth club, at the end of Dolan street where he lived. He also coached the team from Lewis’s in Glasgow to triumph at the inter store championships – and managed to get my dad an apprenticeship there too! Lewis’s was the department store in Glasgow and was part of a chain of department stores around Britain. The Glasgow manager was very keen to win the inter-store sport day and recruited Allan Scally to coach his staff in all track and field events – and even the egg and spoon race!
Sue Walker 29th February 2020.

Again, if Allan was just a coach and runner, would he still be remembered today? I’m not so sure. Allan’s legacy though is that he was also a social activist! From his home in Baillieston, he would spot runners out training and would suggest they joined Shettleston. His view was that if a lad joined the Harriers, he was off the streets and wouldn’t get into trouble.

His sons were all sporty with Frank and Bill both joining the Harriers while Allan junior moved to the states. Allan’s family travelled from Boston to run in today’s race. Frank honed his organisational skills as Shettleston’s social convenor while Bill in addition to racing very successfully in masters events, became club coach and secretary. Bill coached many runners here today and is sorely missed. Bill’s lunchtime sessions in Kelvingrove Park were very popular and are replicated by others today.

There has been Scally involvement in Shettleston Harriers for more than 90 years. 4 generations have been members with three generations still actively involved. Allan Scally’s legacy as a coach is still remembered and appreciated – although we would all have been saying Mr Scally to his face! Allan’s social conscience in funding soup kitchens and getting boys off street corners into more
fruitful occupations is echoed by his extended family’s social and sporting contributions from rugby to Girlguiding, chairing charities to chairing running clubs.

We have Mr Scally to thank for all of this. For his world class running. For his inspiration. For his contribution to Shettleston Harriers and Athletics in Scotland. To Shettleston Harriers for once again putting on a fantastically well organised race. To the Scally family for their support across the years and the generations, and to the athletes, the great and the good, and everyone else too
who has made the Allan Scally memorial race such a fine race. Thank you.

I would ask you to raise your glass, and toast. The Allan Scally!