40 keen Carnegie Harriers runners, and friends, descended on North Queensferry Community Centre on Tuesday, to take part in the PAACE ‘Virtual’ Forth Road Bridge 10k ‘race. The event was organised by the CH committee to get as many members as possible to sign up to the race and support PAACE, as the official Forth Bridge 10k was cancelled for this year. The number of runners was excellent and reflected that fact that the FRB 10k will be much missed from the racing calendar this year.

Many of the runners that congregated at the start line were dressed for warmer weather and used the time to catch up with club mates and familiar faces. The forecast heatwave failed to materialise in this part of Fife and it was a somewhat chilly 13 degrees at the start line.

After a briefing the runners lined up, with the plan to stagger the start. With that in mind the first wave, “or slower!” runners as they liked to call themselves, set off just after 6:30. Wave 2 quickly followed with the final group setting of just after 6:45.

The first mile or so is predominantly downhill and gave the runners the chance to get off to a quick start. The hills are never far away and the climb up to the bridge itself proved challenging, especially with the unexpected wind blowing in the runners faces. From Ferrytoll, it is a mile of constant climbing along the side of the A90, at least there was no deafening noise from the traffic this year! Onto the bridge the runners continue to ascend from the 3k mark (it’s uphill until half way) before a fast downhill section from the middle of the bridge at approx. 5k, to the south end of the bridge. Here Colin enthusiastically cheered the runners on while handing out some much needed water.   The runners then headed under the bridge (and another small hill), before heading back along the same carriageway at about 7k, to the finish at the north end of the bridge. It goes without saying that due to the clear skies, the views from the bridge were spectacular.

All the finishers proceeded to wait (even though the cold was setting in) for everyone to reach the finish, with every finisher heartily clapped across the line. As the fog started to drift in, we all gathered for a team photograph, before heading back up the steps to the community centre for post-race refreshments and a well deserved medal!

A great event that not only allowed many club members to get together and showcase all that is good about CH just now, but also supported fellow local running club PAACE. 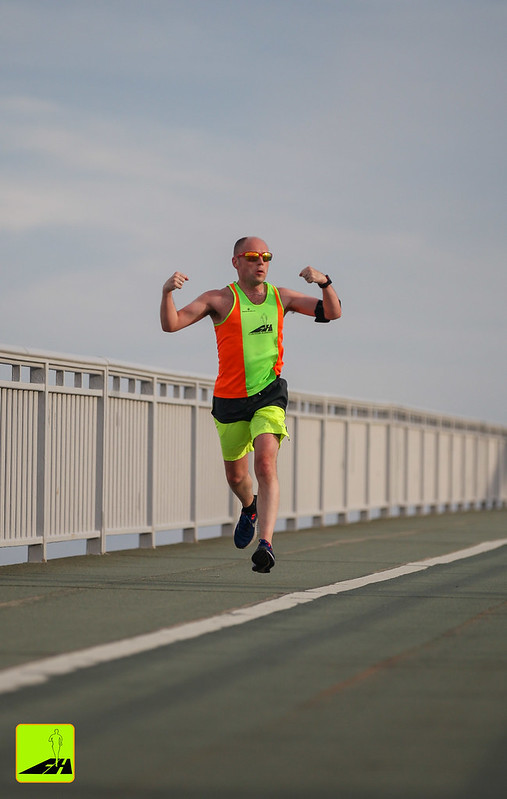